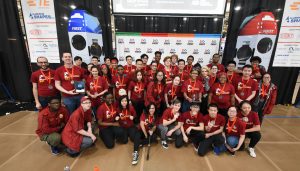 Dedication, teamwork, and spirit.
We’re not just a team, but a family.

The RoboLancers are an award-winning FIRST Robotics team based at Central High School in Philadelphia. With more than 100 members, the RoboLancers are composed of four distinct teams that participate in both the FRC and FTC robotics competitions. Established in 1999, the team has grown from a handful of students whose sole purpose was to build robots, into the school’s largest student-run organization whose main goal is to inspire students across Philadelphia to pursue careers in science and technology.

Over the past four years, the RoboLancers have qualified three times to compete in the FIRST World Championship, and have won 2 Regional Engineering Inspiration Awards and 3 Regional Chairman’s Awards, the highest honor in FIRST robotics. As a student-run organization, the RoboLancers also learn important leadership, management and financial skills as they oversee a large and complex organization, with a budget of nearly $80,000 in the 2018-19 school year.

Our goal is not only to build a competitive robot, but to improve the city around us. We use our experience and resources to increase the accessibility of robotics to Philadelphia. We plan to construct a new STEM Innovation Lab in our building to provide additional practice and workshop space for city teams. In a city where only 13 percent of graduating students go on to receive four-year degrees in science or engineering, we take pride in knowing that we are increasing that number — one student at a time.