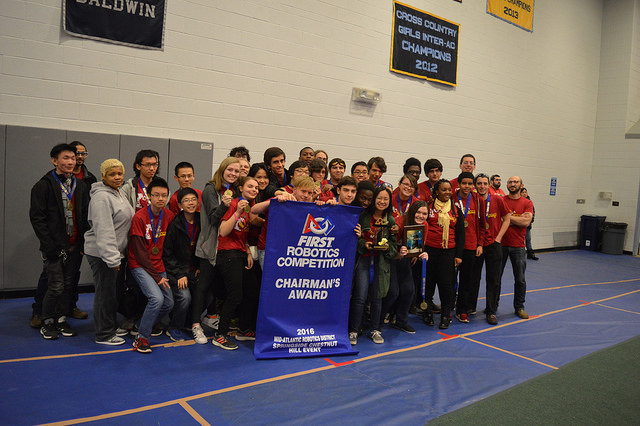 On January the thirty-first, Central High School hosted the ASPIRA FLL Qualifier. The volunteers and judges donned their uniforms and T-shirts, the concession stand was set up and the judging tables opened their doors. By 7:30 AM, the 15 participating teams had arrived and were situated in their pits, three had not attended. The procession began with “The Star-Spangled Banner” (slightly awkward because the gym lacked a flag). At about 8:30 AM, our master of ceremonies, Evan Aretz, cued the start of the presentation judging by playing the first casual song through the speakers. From this time to 12:45 PM, FLL teams prepared to and presented their opinions on how students should be taught in the 21st century to our judges. At 12:45 PM, the heart and soul of robotics arrived: pizza, approximately 50 boxes of it. At 1:30 PM, matched commenced, and Evan Aretz traded in his position as DJ to provide commentary for the matches. The vacant position was left to the scorekeepers. This commenced two hours of smooth FLL competing. While the judges reviewed the results of the competition, the audience and we, the volunteers, begin a dance party, taking music suggestions from the audience, eating leftover pizza, and enjoying ourselves. At about 4:30 PM, the event coordinator, Mr. Daniel Ueda, returned to announce the winners of the ASPIRA FLL Qualifier. After the announcements, the FLL teams left the tournament with “We are the Champions” by Queen playing behind them.

Congratulations to the participants and winners of today’s qualifying tournament. Good luck to those who are continuing on to the championships. Good job to all the volunteers; we had a few errors, but we solved them effectively and efficiently. To the organizers and sponsors of this event: Thank you for your support of this event. It was a great experience and very enjoyable.